Like everyone, when i think of Bermuda, i think of the Bermuda Triangle- with so many missing vessels, I wondered if I would too be missing. A mysterious island cast away in the Atlantic Ocean has a lot to offer. Though the island is not too big itself, there are a good number of conservationists and birders as its a really good place to bird. The island itself is prone to hurricanes…Bermuda embraces on average 4-8 per year, hence a continual effort made to restore habitats destroyed by hurricanes.

I was lucky to be able to land on Nonsuch island and shown how White-tailed Tropicbird and the critically endangered Bermuda’s Petrel nest. along with seeing the different types of spiders, flora and fauna.. I understand that to be a naturalist, you really need to have a good knowledge of everything!

I was also lucky to meet the birdman of Bermuda- Dr David Wingate who rediscovered black-capped petrel and spent lifelong efforts bringing back Bermuda Petrel from extinction. He showed us around Spittal Pond, one of many sites he restored. At 81, he walked faster than me, and I had a hard time catching up.

And of course, besides birdwatching in Bermuda, its a spectacular place to dive! A deep passion of mine and though I admire and am inspired by avid birdwatchers, their knowledge of birds and their habitat.. i think if I put them diving suits, and take them down under, they are probably clueless! 😛

The invasion of Lionfish constantly poses a major threat to Bermuda’s marine ecosystem- with a huge appetite (30 times their stomach volume)  and fast reproduction – 1 year as compared to native fish, 3-5 years. Anyone interested in helping to cull lionfish or support the Bermuda Marine ecosystem can read more info here.

I am glad I have not just one passion but more, for which I can look at myself and say “You’re doing not too bad yourself”.

Below are some birds seen, of course I do find the white-tailed tropicbird very elegant.

White-eyed Vireo! Common but hard to see them in full view~

Weird name for a bird- Catbird

The largest of all phalaropes- Wilson’s phalarope

Cahow also known as Bermuda Petrel. This one is a juvi.

A 3 to 4 hour drive from Beijing gets to Nanpu (南堡), Hebei region- a vast area with mudflats, sea and some fields allowing birds of all shapes and sizes muster in this area for a rest before moving on.

We pedalled to the metal to get to the ponds and sea wall in early dawn hoping to see as much as we can and we’re not disappointed! Waders were all close- sharp-tailed sandpipers, plovers, relict gulls, black-tailed gulls, little terns, whimbrels, sandpipers, stints, etc., just to name a few! Bird photographers will be pleased with the proximity of birds. 🙂

It was brilliant to see so many waders but even more exciting to see a lifer- Reed Parrotbill! They were not hard to see as they come in small flocks and they are residents there!

We looked into every pond and corner possible and arrived on an off-trail, close to the sea. The wind picked up and clouds gathered into odd shapes but we thought nothing of it; mesmerised by the sudden fallout from the sky! Just along this path, we saw- wryneck, brown shrikes, bluethroats, yellow-browed buntings! As we drove along, birds seemed reluctant to fly elsewhere, but to move further up the trail. It was an odd behaviour and very soon we knew why!

yellow-browed bunting along the trail

As we nimble along the trail- sea is on the right and ponds on the left…we were hit by a hailstones! With no trees anywhere in sight, our car took shelter next to a small shrub. The 30 minute hailstone fallout felt like forever! I was worried if the windscreens would crack or the car would be blown into the pond or sea, as the car shook vigorously during the storm. Here’s the video. 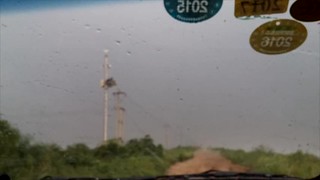 It was 4pm but it felt like late evening. We had no idea where we were and to add to the drama, we were low on fuel..

When winds died down a little we drove through the flooded trail with caution. With our car headlights on, we could see waders took shelter on this trail too. We came to a dead end and decided to U-turn and take the route where we came in! By then it was raining cats and dogs, also raining down plovers, stints, curlews, on to the trail!

By the time we arrived back at the start of the trail, the rain had stopped and out came the sun! With much delight, we not only saw a Japanese Quail, but also a double rainbow- how cool is that? 🙂 Every cloud has a silver lining. With houses in sight, I know I am back to civilisation.

how often do you get to see a double rainbow?

In early Spring (Jan-Feb), Tai Tong Country Park often yields quality birds! Many times, I have taken overseas birders and photographers to this area birding! But because its also a hiking hotspot and family picnic area, I often arrive before 8am to avoid human traffic! After all, the early bird gets the worm. 😛

At the slopes of  BBQ area, thrushes will not be missed! Grey-backed thrush, White’s thrush, Japanese & Pale thrush are not rare here. It almost seems like a thrush haven! Occasionally, eye-browed thrush and orange-headed thrush can be seen too. Other birds foraging at the BBQ area are Olive-backed Pipit, Red-Flanked Bluetail, etc.

grey-backed thrushes seen along the slopes at BBQ area

White’s thrushes almost everywhere, if you can spot them!

As you walked up to the red leaves area (in the map) from the BBQ area, you maybe in for some nice surprises! Rufous-tailed Robin, Siberian Rubythroat are not rare in HK, and this is a gd area to spot them!

Tai Tong Country Park never fails to amaze me. I have seen Black Bulbuls, Rufous-Gorgeted Flycatcher and lately, over 100+ hair-crested Drongos at close distance with overseas birders and birding friends!

Getting to this place is possible even without a car! But it would require a 30min walk uphill from the Tai Tong bus stop. Ofcoz along the way, you’ll see lots of large-billed crows! *cough* By public transport- take the Light rail transport to Long Ping Estate and take the bus K66 to Tai Tong!

Nothing is more enjoyable than birding on high altitude that exudes cooler weather in hot summer! We made visits over 2 weekends, but with a very different approach!

Having packed sausages and sandwiches for lunch ,we left in late morning. The drive from Beijing to Lingshan was approx. 2hrs, but as soon as we approached the outskirts of Beijing, the mountain drive towards Lingshan was breathtaking..!

My mind soon wondered what it’ll be like in winter with snow-capped mountains. 🙂

On the way to Lingshan, testing my GoPro camera!

We saw some birds along the way, but the main highlight was the birds and wildlife at Lingshan! At the top, we saw Hill Pigeons, Common kestrel and Large Billed Crows! We  parked the car and took a walk along the trail near the horse-riding area. Already at the beginning of the trail, we were greeted by Silver-throated Tits, Songar tits, etc that pranced about in the bushes. Suddenly, I spotted something moving in the grass right in front of me! I held my breath and hoped for a clearer view. “A snake”? I thought to myself, sending shivers down my weak spine. Very quickly, it revealed itself- its a Weasel!! I almost squealed with joy when it stood up and looked at me, we were both in shock to see each other! Its my first ever Weasel and I couldn’t be happier!! 😛 😛

Our attention soon turned to a delightful bird’s call that was apparently never ending! Its the Manchurian Bush Warbler! Wow, another lifer for me!

We drove to the nearby village and checked ourselves into a 80 yuan room with no flush and blankets! But we comforted ourselves with a good meal and stargazing with scope! It was awesome to see Saturn with rings and tried to identify all other planets but we were no experts! The night was complimented with nightjar calls but it was too dark to see it! It was a fulfilled day and we couldn’t wait for dawn! 🙂

As always we love to explore! Instead of taking the usual route back, we took an off trail route that lead us to Hebei region! On our way back, we saw a Northern Wheatear, apparently a gd find in summer! It was a gd weekend trip…almost as good as the next weekend trip to the same area but with no accommodation, which I will soon write! Stay tuned! 😛

I finally pulled myself together to write about Kerala, South India…but with over 120 birds in just 5 days, I really don’t know where to start! >.<

Joined by a few friends, we hired a bird guide who is a pioneer in South India and leads an avid team that served us! I remembered Eldhose promised that we’d see some raptors and nightjars and I was very surprised, because I have not met any bird guide that promises anything!

On one afternoon, we went to a low forest plantation area in search for the frogmouth, but to no avail. but we were promised that we’d see them the next day! And sure enough we did! It seemed that our bird guide recruited another team to help search the frogmouths for us! It was amazing to see 2 individuals and 1 pair of Sri Lankan Frogmouths (领蟆口鸱), as these species is only found in the Western Ghats of southwest India and Sri Lanka! We moved in quietly and carefully not to disturb them as its their breeding season (January to March)! They roosted so low in the plantation area, and so camouflaged that if the guide hadn’t pointed them to me, I’d thought they were just leaves!!! 🙂 They look awfully cute! Who loves a frogmouth? 😛

A pair of them!